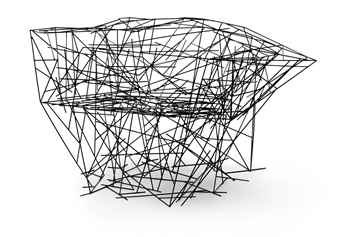 The ‘Black Iron Chair’ is part of the ‘Iron Series’, which also includes the ‘Blue Iron Chair’ and the ‘Red Iron Chair’. For this series, the Campanas’ experimented with shapes and lines, creating an effect of ‘frozen’ lines floating in air. 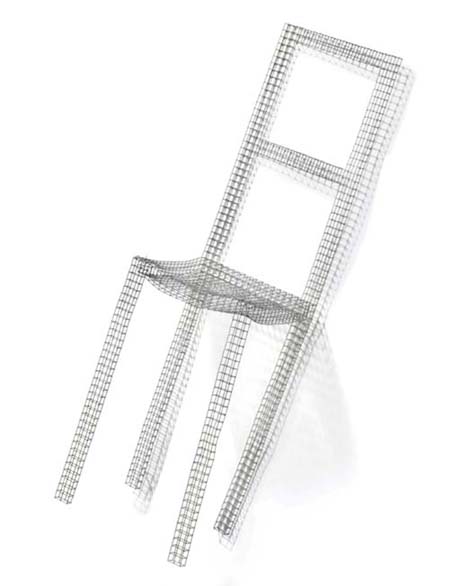 Robert Wilson made this wired mesh chair in a series of 6. One is in the National Gallery of Australia

Some more research reveals Robert Wilson is a Chair Collector. Here is an excerpt from an interview in the UK Independent:

I am a collector at heart,” declares theatre and opera director Robert Wilson, 60, and there is certainly no arguing with that. Indeed, the list of things he collects is almost endless: ceramics, ladders, doors, combs, spoons … Yet, more than anything, he has a quite overwhelming passion for chairs. To date, he has managed to accumulate over 1,000 of them. There are several 17th-century American chairs, an 1836 Shaker chair (which hangs on the wall of his New York loft), a pre-Colombian stool and about a hundred chairs from Java alone. The majority of his collection, however, dates from the 20th century. Many pieces are of distinct historical value. There is a Carlo Bugatti chair that dates from 1902, one of Gerrit Rietveld’s first Berlin chairs from 1923, a Peacock Chair designed by Frank Lloyd Wright for Tokyo’s Imperial Hotel, a stool Isamu Noguchi designed for choreographer Martha Graham, and a chair which belonged to Bertolt Brecht’s actress wife, Helene Wiegel. As if that were not enough, there are also creations from almost every important furniture designer of the past hundred years, from Hans Wegner and Alvar Aalto to Shiro Kuramata and Jasper Morrison. Most of them he bought in galleries or sales rooms. Some, however, he simply picked up off the street. Twelve years ago, for instance, he found a Gio Ponti chair sitting on the pavement in Genoa.

For over 30 years now, Wilson has also been creating chairs himself. “In almost all of my plays, there’s a chair specially designed,” he explains. “Often, the chairs are much like an actor. My theater is similar to Brecht’s. He talked about having an epic theater, where all the elements can have an importance, whether it be light or a prop or a chair.” The very first chair he designed was for The Life and Times of Sigmund Freud in 1969. It hung in space above the stage. Since then, his creations have been marked by a strict, formal aesthetic. A case in point is the cubic chair he made for his 1987 production of Heiner Muller’s Quartet.

“The chairs that I’ve designed are more like sculptures,” he asserts. “I always give them names: the Queen Victoria chair, the Joseph Stalin chair, the Sigmund Freud hanging chair, the Marguerite Duras chair. In a sense, they are more like poetic visions of personalities of our time, the way the Greeks made sculptures of the gods of their times.” His Saddam Hussein chair consists of a huge block of concrete 1.5m high and a piece of plywood. The Marie Curie chair, meanwhile, more closely resembles a lectern. Made from thin, steel rods, it comes with an audio tape extract from the scientist’s diary. “Pierre Curie [her husband] died and two days later, she gave a lecture at the Academy of Science in Paris,” he explains. “She is talking about her grief.”

Eventually, all the chairs will be housed in an exhibition space at the Watermill Center on Long Island, where Wilson develops most of his productions in workshops every summer. For the moment, however, they are mostly kept in storage houses in places like Brooklyn and New Jersey. Still, several dozen have found their way into his 700sq m loft in the heart of TriBeCa.

His fascination with chairs dates back to an early age. He was born in Waco, Texas, in 1941. His father was a real-estate lawyer. Both his parents were distant figures. “I was never touched that I can remember as a child,” he has said. “The first time I can remember [my mother] kissing me was when I went away to the University of Texas.” At the age of eight, he went to visit an uncle, who lived as a recluse in the desert of New Mexico. “He had an adobe house, which he’d built himself,” recounts Wilson. “It was very unlike my parents’ house, which was full of thick-end carpets and televisions. He had very few objects: American-Indian pottery, Navajo blankets and a few pieces of furniture.” Among them was a thin, wooden side chair. Wilson told his uncle how much he admired it. Two years later, he received it as a Christmas present.

Paradoxically, Wilson rarely sits on any of his chairs and obviously does not view them as utilitarian objects. “I always think of what Gertrude Stein said when a reporter asked her: `So, Miss Stein, what do you think of modern art?’ `I like to look at it.’ I have so many [chairs] in my loft that there’s no place to sit. Instead, I just like to look at them.” 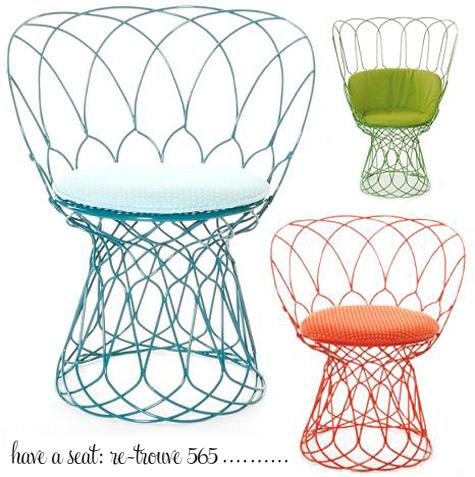 If you look at www.patriciaurquiola.com you would think that in one way or another Patricia Urquiola doesn’t like a real web presence… 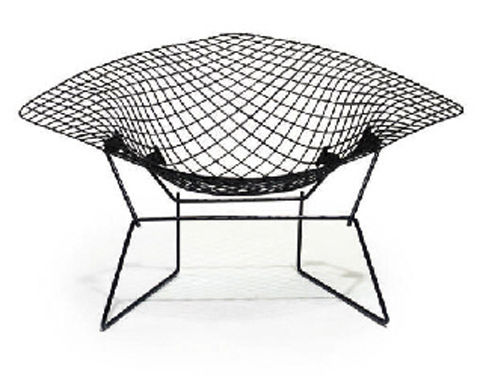