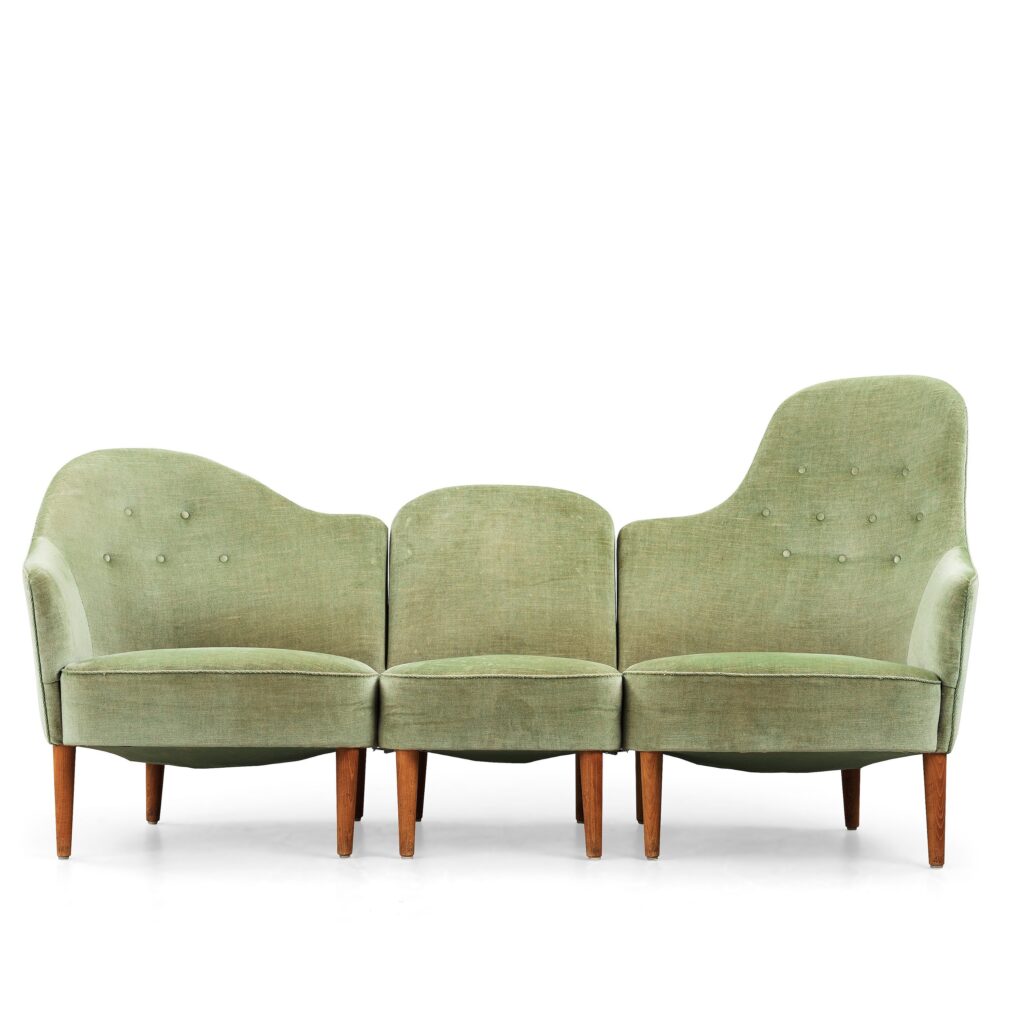 I may be wrong, but I believe Samspel means “play together”, a nice name for a sofa. 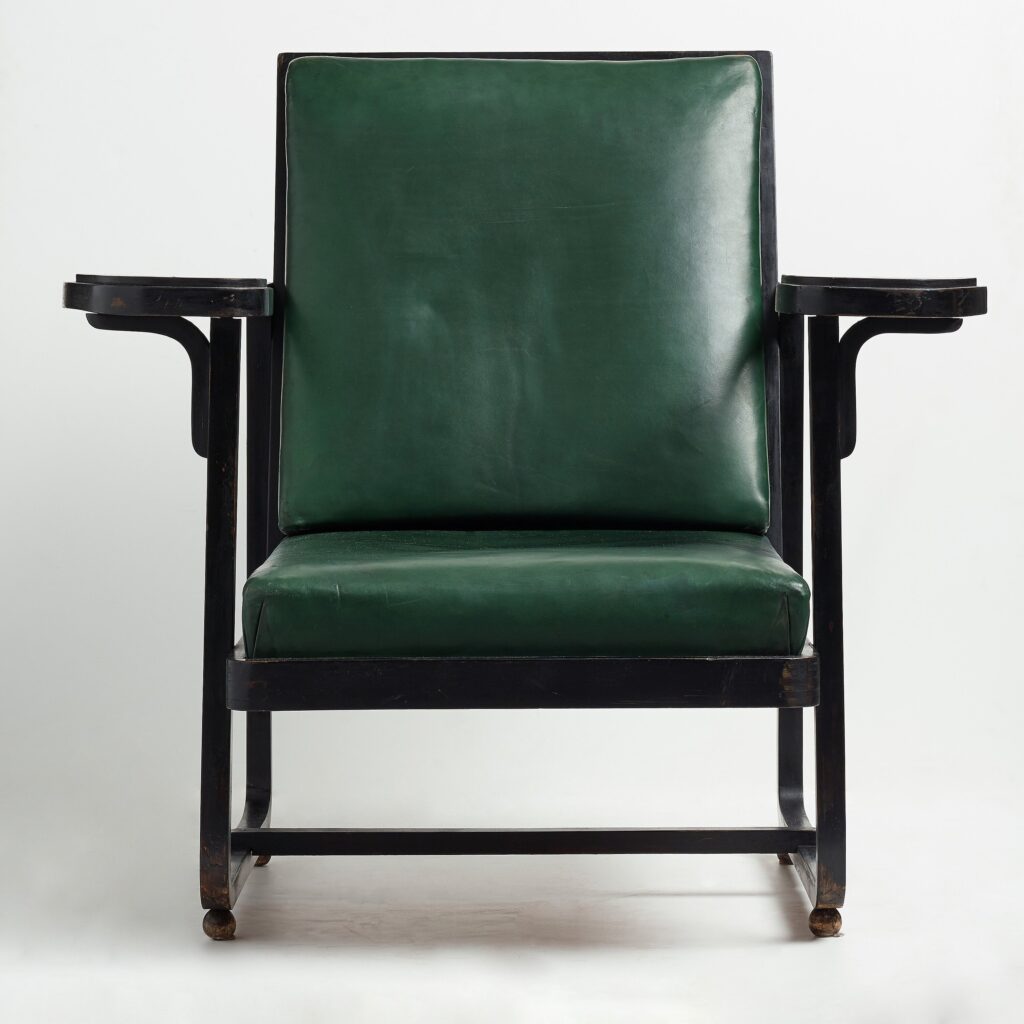 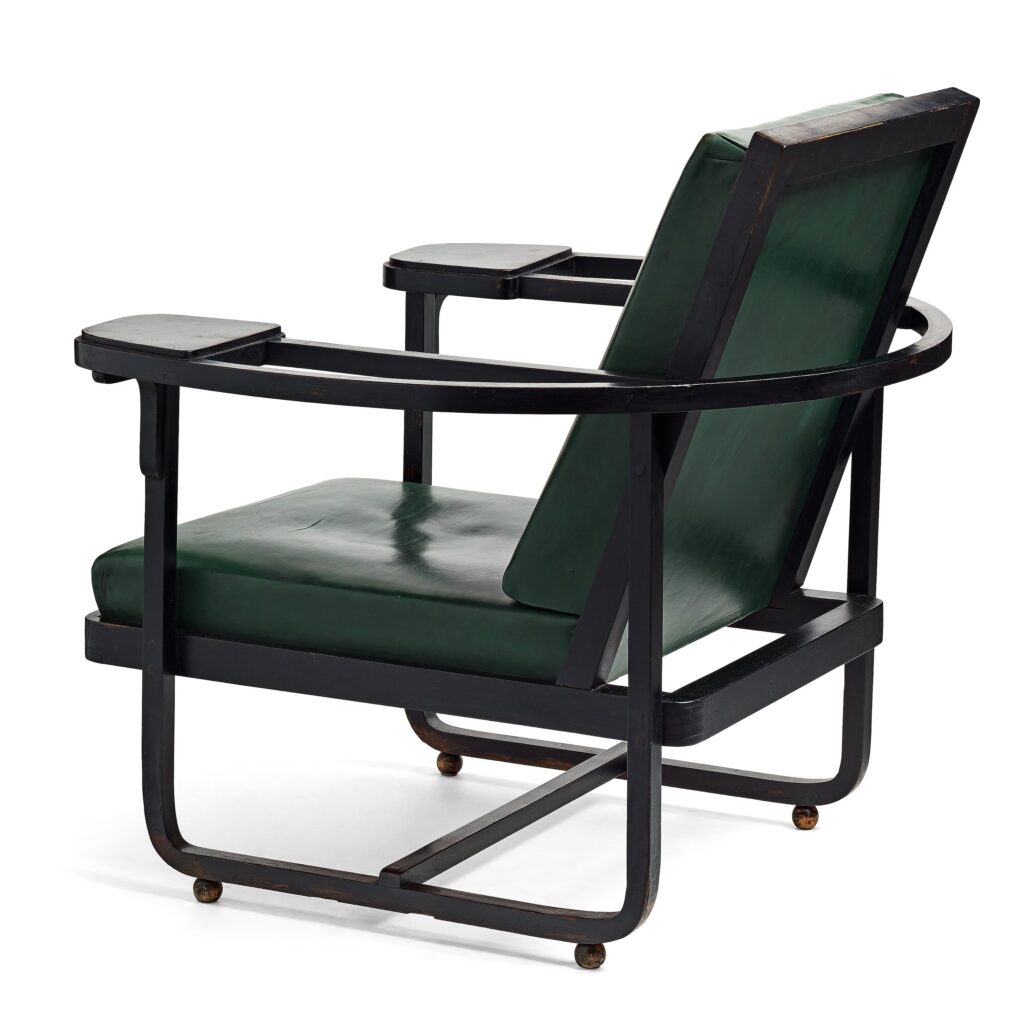 The chairs were designed for Strömsholmens Café at the Industrial Exhibition in Norrköping in 1906. These armchairs were a wedding gift from Carl Bergsten to his close friend and colleague Contractor Ernst Lundberg.

Architect and furniture designer Carl Bergsten’s significance for the development of modern architecture and furniture design in Sweden during the beginning of the 20th century cannot be overestimated. Several of his assignments, such as the Industrial Exhibition in Norrköping in 1906, the Swedish pavilion at the World Exhibition in Paris in 1925 and the interior of the MS Kungsholmen in 1928, have been of crucial importance for the development of Swedish architecture and design.

Carl Bergsten (1879-1935), then 25 years old, was appointed Chief Architect at the Industrial Exhibition in his hometown of Norrköping in 1906. During an earlier study trip to Europe, Bergsten met architect Josef Hoffmann in Vienna and became inspired by him and his colleagues active in the progressive Viennese Secession. Bergsten took the impressions home to Sweden and in 1906 he carried out one of the largest modern manifestations in Swedish history. For Strömsholmens Café and Restaurant, Bergsten designed, among other things, a chair and an armchair which, with its austere geometric shapes and technical innovations, came to write Swedish furniture history. The armchair, which according to pictures from the exhibition was only made in a few copies, is extremely unusual. To our knowledge, in modern times it has never appeared on the market but only appeared in public at Norrköping City Museum. The majority of the chairs were probably destroyed in a fire in the 1930s. The exhibition building was later demolished in the 1940s. These two exclusive armchairs are probably Bergsten’s first executed copies as they both differ in design, with odd manufacturing details and material choices.

Bergsten’s innovative design required its manufacturer, which Bergsten found with Gemla Leksaksfabrik in Diö. The then-new bentwood technology that inspired him during the meeting with Josef Hoffmann in Vienna required an ambitious producer. Together with Gemla, they experimented with materials and techniques to produce the first bentwood furniture in Sweden, the auction’s two armchairs.

Contractor Ernst Lundberg (1878-1946) was born in Strömsbro in Gävle. After graduating as a civil engineer in Stockholm, Lundberg quickly became successful for his enormous professional knowledge and his happy mood. The industrial exhibition in Norrköping in 1906 was one of his first major projects and was the starting point of a long and close friendship with Carl Bergsten. Ernst Lundberg married Astrid Lundberg in 1906. Carl Bergsten’s wedding gift, the two armchairs, has followed the family ever since. Ernst Lundberg collaborated with several architects during his career and became a successful developer. 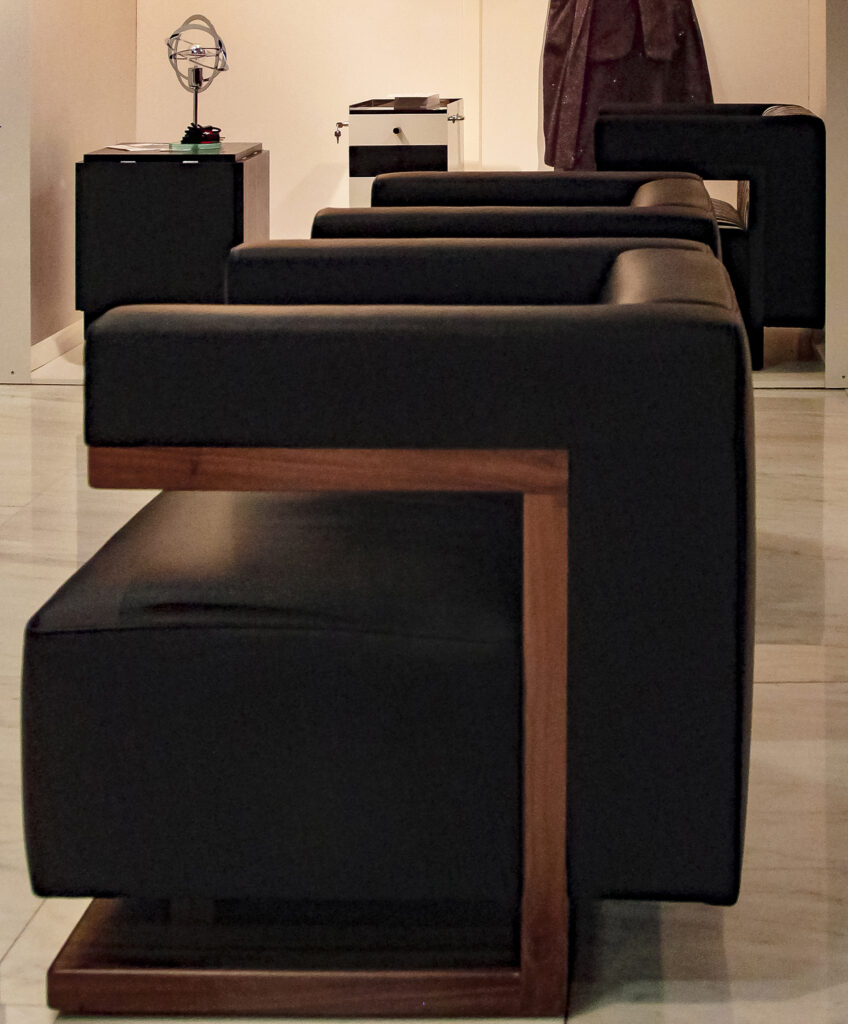 The video gives an idea of Walther.

Reverse Google Image search does not always help out and we have some very distinguished and knowledgeable readers here.

Anybody an idea of this bench’s provenance? 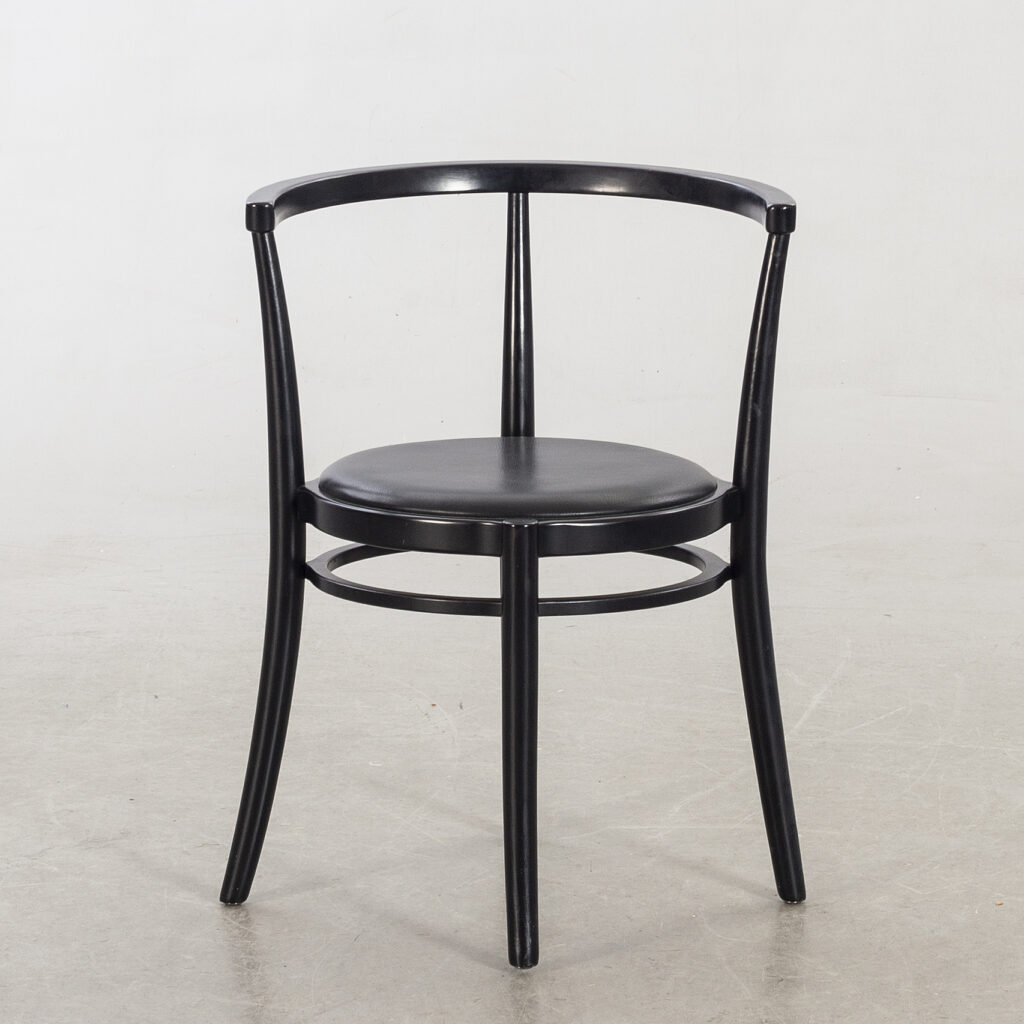 Åke Axelsson (b. 1932) has designed and built more than 200 chair models during his 60-year career as an interior architect, from 1957 to the present. His major contribution has focussed on furniture for the public domain where we can all meet: libraries, restaurants, town halls, churches, museums, cafés and so on. These interiors often lead to specific designs of furniture which were then put into production. His focus has been social; designing the best possible furniture for all of us.

Åke grew up with seven siblings on a small farm in the south of Sweden during the 1930s and 1940s. The subsistence farm economy meant that almost everything had to be done by hand. Survival was inherent to the hands and the materials. ”Do it yourself” was a lesson that became typical of his professional life. Åke is by no means just a draughtsman. When he is developing a new item of furniture he goes to his workshop and creates a viable prototype using his wood-working skills. While he was still at elementary school his teacher recognized that Åke had “something in his fingers” and he encouraged him to go on developing his skills. His first piece of furniture was a little wall-cupboard that he completed at the age of twelve. It still hangs on his wall at home. Following some local wood-working courses, at fifteen he left home to train as a cabinet-maker in Visby during the years 1947 to 1951. More advanced students built furniture for the famous Swedish designer Carl Malmsten. The furniture was sold at the Malmsten shop in central Stockholm. Following this, Åke undertook an apprenticeship in Munich and then in the little Swedish town of Östervåla. But he soon began to long for something more in life than the somewhat dreary prospect of working in a furniture factory.

He applied for admission to Konstfack – now known as the University of Arts, Crafts and Design in Stockholm – where he trained as an interior architect from 1952 to 1957. “It was like entering a brand-new world”. His principal tutor, Carl-Axel Acking, was an architect and furniture designer and he prepared his students for important tasks in Sweden’s emerging welfare state. Lecture theatres, adult education facilities, schools, town halls – there were any number of commissions. And cabinet-maker Åke Axelsson helped to build the new society.