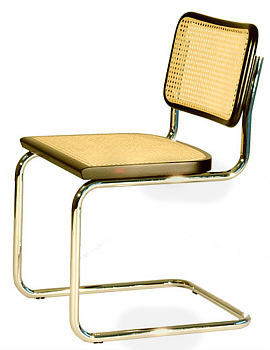 Cesca 1 thanks to Steelform.com

They knew each other. All three worked for, or with people who worked for, the German Bauhaus.

I looked up the following 3 different language varieties of Wikipedia:

This post is subject to some updates in the future.

Avant-Garde Design and the Law: Litigation over the Cantilever Chair
an article by Otakar Macel in the
Journal of Design History, Vol. 3, No. 2/3 (1990), pp. 125-143
Oxford University Press

at Jstor, a University related retrieval system at this link: Avant Garde Design and the Law sustains the Dutch Wiki version.

The German Thonet Factory has a Bauhaus overview where the design of several chairs is attributed to Marcel Breuer and the Artistic Copyright to Dutch Chair designer Mart Stam, which is probably close to the outcome of the German litigation.

6 thoughts on “The Cantilever Chair: By Mart Stam, by Ludwig Mies van der Rohe or by Marcel Breuer?”