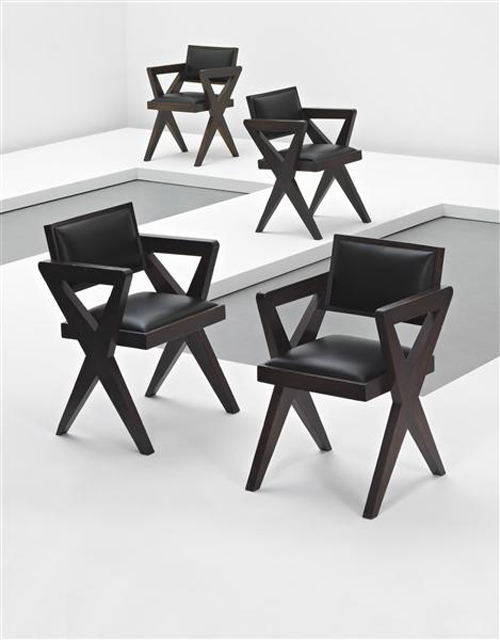 On March, 31, 2011, I was witnessing a Sale by Wright in Chicago online in real time. I saw many Chandigarh items of furniture from Le Corbusier (Chosen name for Charles Edouard Jaenneret) and his cousin Pierre Jeanneret, labeled “Chandigarh”, but couldn’t place Chandigarh until I stumbled on an article in the Design Observer.

India and Pakistan were split up in 1947 and India lost Lahore, the capital of the Punjab, to Pakistan.

Jawaharlal Nehru, the first prime minister of India, commissioned Le Corbusier (Charles Edouard Jeanneret) to build an entirely new city “free from the fetters of the past.” which became Chandigarh. Le Corbusier commissioned his cousin Pierre Jeanneret for interior design and he designed thousands of pieces of furniture for the government buildings and private residences of Chandigarh.

Some inhabitants of the city are not over enthusiastic with the design, because concrete and the Indian heat didn’t fit well together.

Chandigarh seems unattended and not well kept. Between 1999 and 2008 Indian officials have simply thrown out as garbage or sold via local auctions many pieces of the original furniture.

It appears that many pieces were collected by the Frenchman Eric Touchaleaume.
He wrote a book about this Indian Adventure. Auctionhouses gladly refer to this book as proof of the provenance…
Earlier he had retrieved Jean Prouvé furniture from Congo Brazaville. Read this interesting interview with him in the Guardian in February 2008.

The furniture pieces are sold through various auction houses all over the world for exorbitant prices.

It is clear that with such prices a controversy is born: Are the auction houses accessory to looting or merely doing their job? The same sort of controversy that occurs when a ship sunken a long time ago, is recovered and the cargo (for instance precious china) is auctioned.

We at Chair Blog don’t want to take a position for or against, but simply register what is happening.

Now it is time to publish this post as end of March 2012 again there are many pieces at an auction. This time Wright.

From time to time we will report more on the subject.