I rediscovered the designer who is responsible for the various Pixel Chair and Sofa Upholsteries, the Spanish designer Christian Zuzunaga, also know as Mr Pixel. Here on the Moel Lounge Chair by Inga Sempe for Ligne Roset 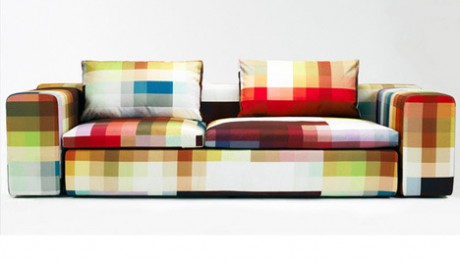 It is strange to think that not too long ago there were no such things as pixels. Before the invention of photography, artificial pixels (short for PICture ELements)simply did not exist. It wasnâ€™t until the personal computer hit the mainstream did the word â€œpixelâ€ become widely known outside of geeks, video/photographers and the CIA. Now that several generations of designers have never known a world without pixels, it was expected that this single common component of an image would find its way onto non traditional objects. Cristian Zuzunaga, a graduate from the UKâ€™s Royal College of Arts, has designed this Pixel Couch that will be produced by Danish manufacturer Kvadrat and sold through Moroso. I wonder what it would look like from far away.