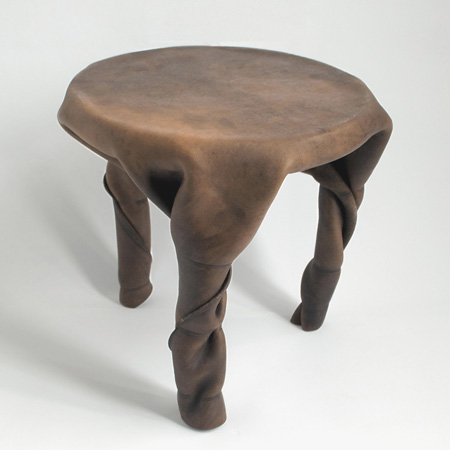 Medieval knights and soldiers once wore boiled leather or cuir bouilli armor. Thick leather was boiled in water,oil or wax. The treated leather remained soft enough for it to be molded into various shapes. The hardened leather with a wood-like consistency provided some protection against bludgeoning blows. It was used as scale armour or in cuisses or greaves – thigh and shin guards.

Well, today we have far nastier and efficient ways of killing so boiled leather armor only exists in medieval reenactments and museums. But the art of boiled leather has now been cleverly applied for more peaceful purposes by Simon Hasan, an industrial designer. He produced a range of boiled leather products for a recent Royal College of Art Show held in London, England. He made two boiled leather stools called Bambi and Twist.

The boiled leather seat of Bambi is hollow and was made from a single piece of leather. It does have a deer-like look about it hence the name. Twist was created by molding the boiled leather around tubes which were later removed. Twist is thus self-supporting and only contains a ring frame in the seat. He also made several different kinds of vases combining boiled leather with other materials such as resin and acrylic. Molds are used to shape the leather and later removed. 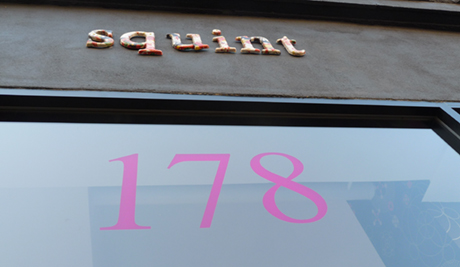 While roaming London for the London Design Festival 2008 I walked along 178 Shoreditch High Street, London, E1 6HU, and my eyes were drawn to the then closed but very colorful shop “Squint”. 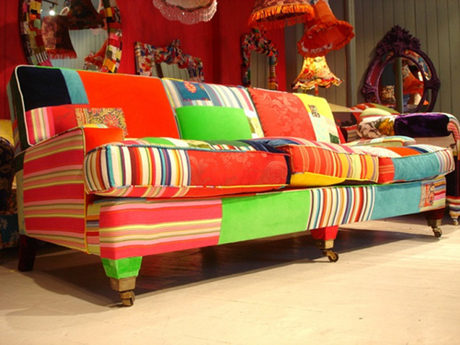 When home it appeared I had already pinched a photo from I don’t know where on the web. 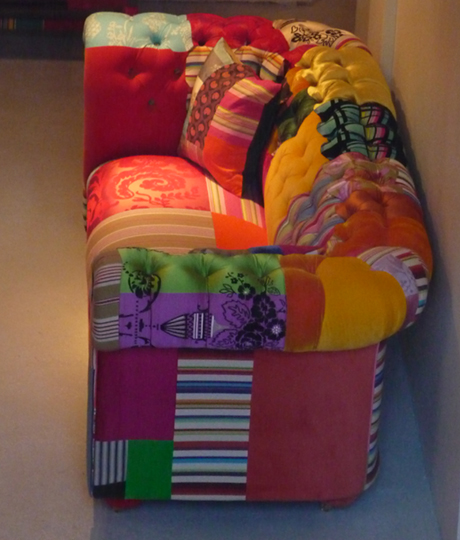 I took a couple of photos.

Squint opened in East London at the beginning of 2005, it was started by Lisa Whatmough a former Sculptor and Painter. Her initial desire was to showcase the antique textiles she had been collecting and found that a fusion of period furniture and fabrics made for unexpected one off pieces. 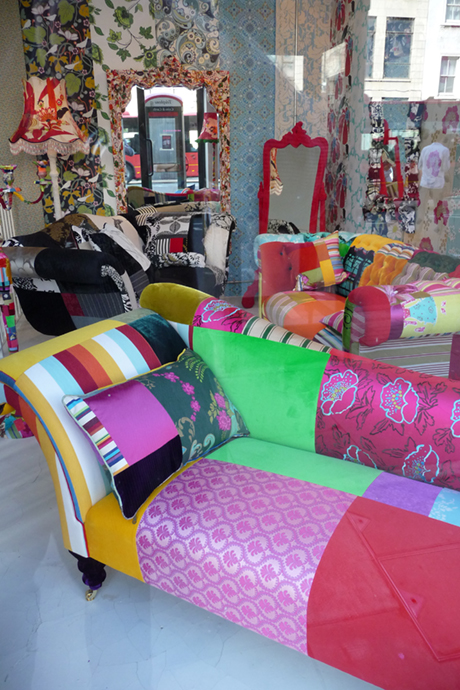 The range comprises of items such as Victorian chaise longues and iconic Egg chairs and includes all types of upholstered furniture as well as mirrors and lighting, each piece bespoke incorporating a mix of contemporary and vintage fabrics.

As Squint has grown it now makes to order, classic designs meticulously made in England and upholstered traditionally, with tied springs and hand stitched seams. Each design is priced individually depending on the final mix of fabrics used.

Lead times are running at between ten and twelve weeks and any items ready to go will be shown in the Off The Peg section.

Squint is not cheap. Probably because the the chairs and sofas are new. Their products remind me of NYC based Apryl Miller. There are similarities, as Apryl is also a painter and sculptor.

Ah now I see where I had the picture from: I featured them already here… 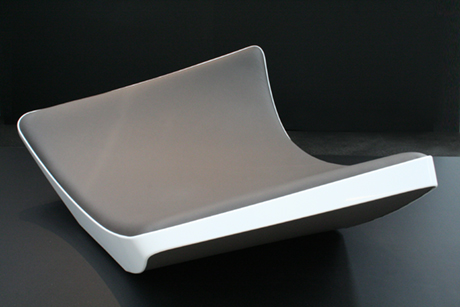 Tent Londen is the first venue where the asymmetrical Holo Nest Chaise is shown.

About HOLO:
HOLO is a new furniture design collaboration between Australian mates and designers Michael Travalia and Christopher Thomas. Thomas and Travalia currently work out of Oslo and London and collaborate on a part time basis. 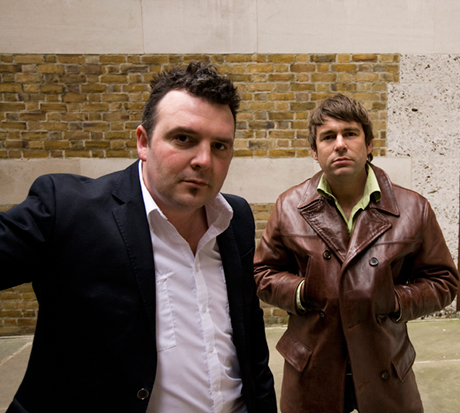 Christopher Thomas and Michael Travalia met in the magical surroundings of a temperate rain forest of southern Tasmania in Australia in 1994. They were design students attracted to the furniture course at the University of Tasmania. After graduating the friends both left Tasmania.

Initially Christopher Thomas returned to South Australia where he became a design associate at the Jam Factory Centre for Contemporary Craft and Design in Adelaide, Eventually he opened his own gallery Christopher Thomas Art & Design, was employed as a lecturer at the University of South Australia, created work for exhibitions and made one off commission pieces for private clients.
After meeting his Norwegian wife, Thomas departed for a European holiday and fell in love with the wild mountains and fjords of western Norway. After working as a cabinetmaker in a historic carpentry firm in Bergen, he currently works as a lecturer in the media lab at KHIO, the Oslo national academy of the arts. Thomas has lived in Norway for the past four years. 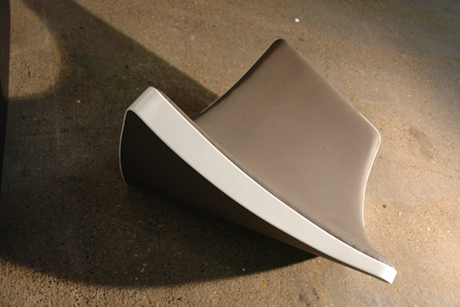 Micael Travalia remained in Tasmania after graduating and worked with furniture prototypes for the forestry industry in Hobart. He continued creating work as a designer – maker and had pieces accepted into ‘The Tasmanian Wood Design Collection â€™. Travalia then worked on a major architectural commission at The â€™Design Centre Tasmaniaâ€™ in Launceston; with his father David Travalia and Architect Rick Le’Pastrier. Looking to expand his experience and horizons the boy from the bush
moved to Melbourne in Victoria where he changed directions and worked as an interior architect.
He then departed on a working world holiday with his singer songwriter wife from which he has never actually returned. He is currently head of interior design at a multi national design and branding firm in London. 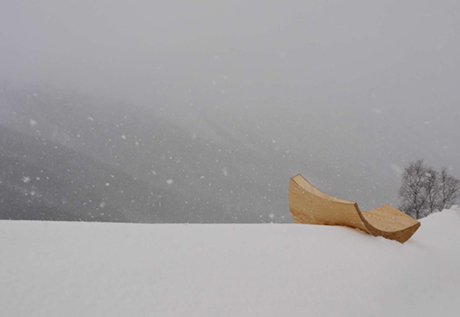 Remaining close friends over the years and across the globe Thomas and Travalia organized a brief retreat to a remote custom-built arts centre on the west coast of Norway for a combined artist residency and holiday in December 2007. The isolation of the ‘Nordic Artists Centre in Daleâ€™ and sheer beauty of the icy environment created a space to think and contemplate as well as create prototypes.
The duo and their wives shared a wooden cabin as well as a studio and fully fitted wood machine shop. The centre is a hidden gem and is nestled above the tiny fjord town of Dale.
The location, dark winter conditions and materials at hand lent themselves to working freely in an honest, intuitive and creative way. Thomas and Travalia created drawings, mock-ups, and furniture
prototypes.

They treat HOLO as a â€™design jam sessionâ€™ and look forward to creating new connections and interactions within the design industry .The Initial collection will be available as a limited edition available as a pre order. The furniture collection has been produced exclusively in Oslo and London.

In their workshop they developed a second, yet unnamed, prototype. 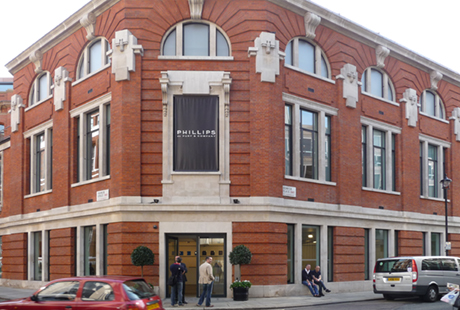 There I was able to take a photo of Maarten Van Severen’s .03 chair myself: 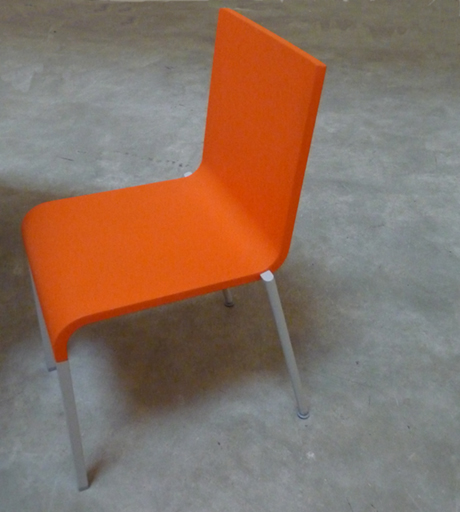