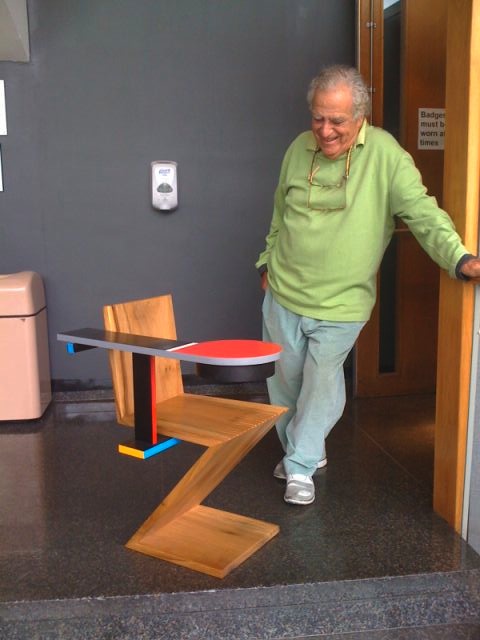 Here Vladimir Kagan admires it at the 2010 Furniture Society Conference. His post about the MIT conference of the Furniture Society inspired me to track GKB down with the amazing discovery that GKB did not make 0ne but a whole series of Seventeen Zig Zag variations which caused me as a Dutchman and a Rietveld fan to publish the entire series of 17 Zig Zag variations.

Garry Knox Bennett featured this variation at the MIT conference of the Furniture Society. Kagan:

A man the size of a Grizzly and the sweetness of a Teddy Bear. In the 60â€™s, Garry turned pot smoking from a sub-culture into a million dollar enterprise by inventing and producing a better roach clip. Today he is a consummate craftsman: His work is entertaining and adventuresome. Garry has had numerous exhibits and books written about his work. Check him out in a book called â€œMade In Oakland: The Furniture of Garry Knox Bennettâ€.

In recent years Garry created 120 chairs, each a work of art: Unique, often whimsical. 52 of them were exhibited in the Bellevue Art Museum in Bellevue, Washington and traveled to five other venues over the next four years. The museum published a catalog in a beautifully illustrated book titled â€œCall Me Chairmakerâ€. 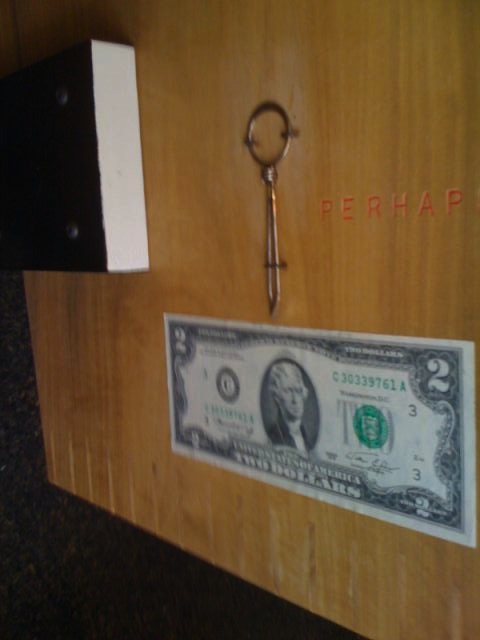 For the membersâ€™ exhibit Garry signed one of these chairs with an original roach clip and a two-dollar bill and the word â€œperhapsâ€. To explain this tongue-in-cheek humor, it is tied to an earlier exhibit that was titled Historical Woods: the exhibitâ€™s premise: Woods acquired from historic sitesâ€¦. The Poplar wood used to make his spin-off of Gerrit Rietveldâ€™s Zig Zag chair came from President Jeffersonâ€™s estate, (hence the two-dollar bill with Jeffersonâ€™s image on it.) The other corollary was that Jefferson was reputed to have grown hemp on his estate, (ostensibly for making rope and other useful items). Garry suggests â€œperhapsâ€ with a roach clip)â€¦. Jefferson was an innovator and was credited with having added the writing arm on a Windsor chair, as Garry did to the Z chair.

Garry Knox Bennett will have an extensive survey exhibition of work at the Richmond Art Center, Richmond, CA from September 14 – November 30, 2010 with a reception on September 25 and an artist talk on October 23. This will be the largest body of work on exhibit since his 2001 retrospective.