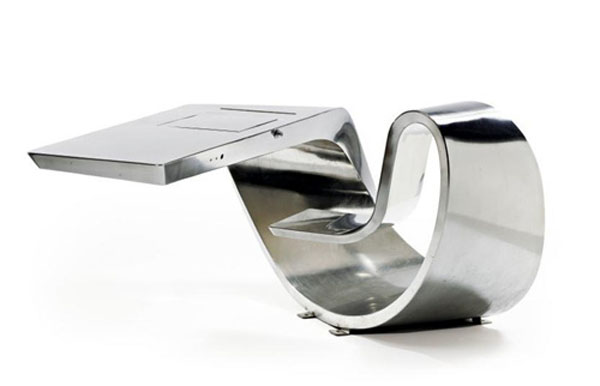 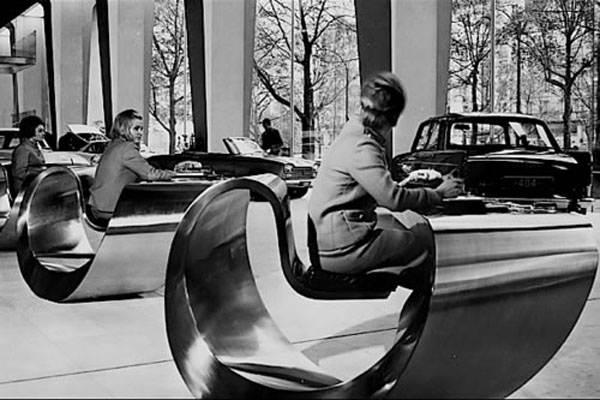 Furdess was created by Elsa and Grégory Maitre…
While looking for an important piece to reproduce, they came across a collector who told them of his love at first sight for a desk exhibited at the Louvre des Antiquaires 25 years ago. Though he had not been able to buy it then (it cost almost as much as a small apartment in Paris), the memory of the desk has never left him.
Research began.. They managed to find the designer, Ben Swildens, and they met in his Paris studio. In a week the decision was made, new life will be given to this desk whose simple but ingenious design certainly makes it one of the most beautiful desks ever produced.

The desk reproduced today does not have a name because of the simple reason, it is an utmost luxury, and it is not meant be sold, why give it a name? Only some rare collectors can own it.

An original production for the headquarters of Peugeot

The desk was designed in 1966 for the construction and relocation of the Peugeot headquarters to Avenue de la Grande Armée in Paris. At that time Ben Swildens collaborated with Max Ingrand, the great French designer of the 50’s and the 60’s who carried out this project with the contribution of architects Louis, Luc and Thierry Sainsaulieu. Three models of the desk were produced for the reception assistants. The Croiseau workshop in Paris made these desks.
During the last several decades, the three 1966 models reappeared regularly at auctions and design fairs at the Louvre des Antiquaires in Paris (1985), at Phillips de Pury auction house in London (1989) at Sothebys in New-York (2006), and at the Sebastian Barquet gallery in New-York (2007). The desk has also been presented at the 2006 contemporary art fair in Miami. 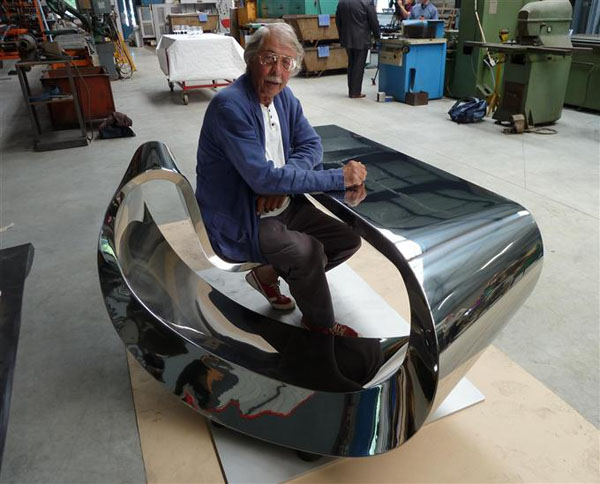 Born in 1938 in the Netherlands, Ben Swildens lived in Maghreb. His father was an architect. He settled in Morocco to work with some Americans. In Morocco, at the age of 13, Ben Swildens discovered perfumes, palm trees and dreams. In 1956, his family moved to the international zone of Tangiers. At the American school he learned Arabic and Spanish. Watching his father enjoying drawing, Swildens decided to imitate him. Swildens, a hard worker, became the best among his fellow students. Soon he was sent to Switzerland to study engineering, while staying with Jean Tschumi. Yet Swildens disliked mathematics; thus he moved to Paris and attended the school of decorative arts where he graduated in 1961.

After finishing school in Paris, he had a fantastic period of his life meeting talented people and working with them. In the early 60s, Ben Swildens meets Jérôme Savary, who eventually became an important theatre man, and Jean-Paul Goude, the inventor of the graphic style jungle. Swildens also met the painters like Rougemont and Michel Quarez. “We dabbled in all sorts of things,” said Swildens. These gifted students worked with the significant creative craftsmen of that time period such as Arbus and Poillerat, who also were their teachers. Several private companies recruited the students in order to work with innovative thinkers and often organized competitions as well.

After a brief stay in New York, Ben Swildens returned to Paris and started working with Joseph-André Motte, the decorator of Orly and Maison de la Radio.

I came across this famous desk via moustachioed, via nevver and via Peugeot 1966
Some more research learned me the above.

Also I was addicted to the Pininfarina designed Peugeot 404 you can see in the second photo top right of which I have driven 4 in the past. Only problem with it was its rustiness.